Charles Plager
About Me

Lots of Nice riding
or Winter is Finally Over!

Since my last entry two weeks ago, I've gotten out for just over 100 miles of riding (five rides on the Cruzigami Mantis and one on the Sofrider).

First, I ordered a new front derailleur pulley for the Sofrider.  When I removed the old one, I found out that it wasn't broken, but rather the cable had simply fallen off.  The new one spun more easily, so I put it on.  I also moved the N-Gear jump stop down a bit. 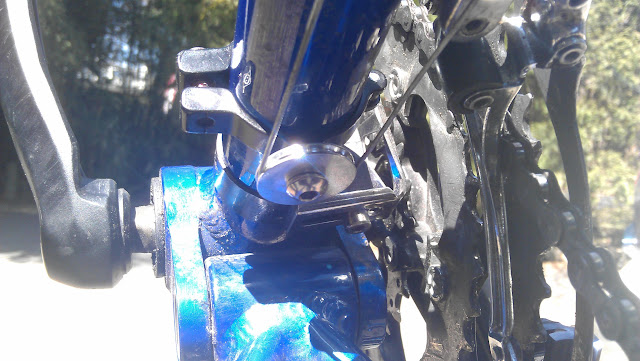 The new front derailleur pulley above the jump stop.

When I had the Sofrider up on the stand, the chain was running a bit rough (as well as having evidence that the Mantis was faster than the Sofrider; see below), so I replaced it with a KMC 8 speed chain and while I was at it, I replaced the cassette with Shimano HG41 8 speed cassette as well.

The rest of the time, I've been riding the Mantis.  I replaced the front tire with a Schwalbe Marathon Racer (a nice enough tire, but a real *#$& to get on).

The Mantis feels very similar to the Sofrider (albeit faster). Last weekend, I went out for two different rides including an (almost) 24 mile course that I've recently done with my Sofrider where I averaged 1.8 mph faster on the Mantis (12.3 mph) than on my Sofrider (10.5 mph).  The Mantis feels just as stable as the Sofrider and it doesn't suffer from its small wheels at all (either in terms of speed or stability).

On Wednesday, Kate wasn't tutoring and rain was expected the next couple days, so after putting the monkeys to bed, I checked the weather report to see what time the sun was setting and set out at 18:45. The ride started off brilliantly.   I was climbing up one of my favorite hills when I realized I should have checked the weather report more carefully. I saw lightening a few miles ahead.

After reaching the top of the hill, I turned around and really started moving.  For a couple miles, it looked as if I would outrun the storm.  But, alas, that didn't happen.  I completed 9 miles with a moving average of 14.5 mph (my fastest ever recorded average speed of an entire ride).  I do wonder how fast I would have been if I hadn't been trying not to get wet; apparently a little motivation can go a long way.

The seat angle on the Mantis was already lower than on the Sofrider. But I wanted it lower still, so I bought a layback seatpost and seatpost shim and I successfully installed these yesterday morning. 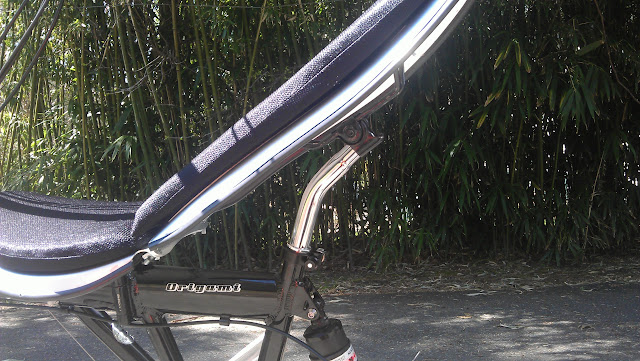 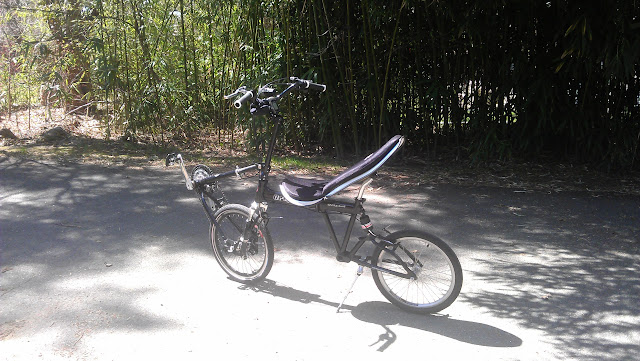 The entire bike with the layback post and lower seat angle.

The seat angle is lower than I'd ever had it (and there's still more room for it to go lower still).

Although I could install a fully supported rack (as I did on the Sofrider), but I decided instead to get a seatpost rack which allows panniers instead.  It has a quick release, so when I don't want it, it's easy enough to remove. 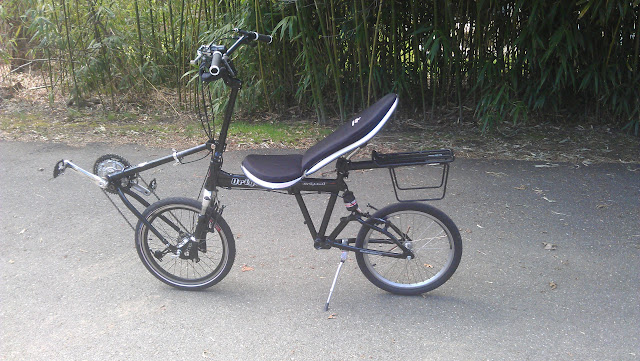 The clamp-on rack that allows panniers. 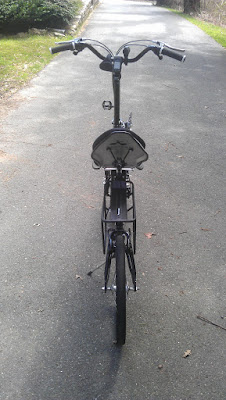 The rack from behind.

Yesterday morning, I went out for a quick 14 mile ride.  With the angle it is, I'm thinking of making a neck rest (like this homemade one for a Cruzbike Silvio) and I'd almost certainly want to add it if I decide to go even lower.  For most of my riding, I enjoy being even lower (less drag).  At intersections, I often found it useful to sit up straight to get a better view.

Today I went for my first ever ride with the Sound Cyclist Bike Club (or SCBC).  The 28 mile ride (with an estimated average speed of 12.5 mph) started 4 miles away from my house and I decided to ride to it instead of driving.


For the most part, everything went as planned.  I left with enough time so that if I got lost (which I almost did), I'd still get there in plenty of time.  And that worked.  We started off at 10:30 with a nice downhill to get things going.

One problem I have riding with DF (diamond frame - regular bicycles) is when I go out with a group that has the same average speed, our speed profiles don't match that well. Because I'm generally more aerodynamic, I go faster on the descents than most of them (and because of where I was in the pack, if they were coasting down a hill, I was often riding my brakes). Because I suck at climbing hills and the aerodynamic advantage is gone, the steeper the hill, the slower I climb.  There were several points where we grouped and it wasn't until  towards the end that I was really at the back of the pack. At somewhere around 22 miles in the group ride, I fell far enough behind that I must have missed a turn and at 23½ miles (28 miles total) reached a busy street that I was sure wasn't on the route.  My GPS pointed me towards home and it was a fairly uneventful 3½ miles.

Over the ride with the group, I averaged 12.8 mph, so I did pretty well.  I clearly still suck climbing hills, but as I've said before: "Hills suck, go climb hills."  Sounds like I need to follow my own advice.

As of now, I have just over 100 miles on my Cruzigami Mantis. I set out to make a bike that works well and can fold or be packed.  I've ridden stably up steep hills averaging at less than 3 mph and ridden down similar hills at 40 mph (ok... 39.9 mph) .  The Mantis is as stable as my bigger bike, as fast as (or actually a bit faster than) my bigger bike, but folds and should be packable to a much smaller size.  I think it's fair to say it's a success.
Posted by Charles Plager at 7:27 PM