Charles Plager
About Me

My wife's family is pretty large.  In addition to her parents, she has four siblings, all of which have spouses, fiancees, and partners.  So instead of everybody buying Christmas gifts for everybody, we do a Secret Santa where each person gets the name of somebody to buy a gift for.  Traditionally, one pulls names from a hat to decide who gets who.  Since all of us are never in the same place at the same time, a few years ago I wrote a Perl script that picks people (making sure that spouses don't get each other) and emails everybody who their Secret Santa recipient is.  This has worked out very well for us and this year, I got new bicycle gloves, bicycle shoe covers and this gorgeous and functional giraffe horn:

My new horn (although it will probably end up on my daughter's trail-a-bike.

I've been trying to ride this winter. Really, I have. But it has not been easy getting out there. And it really hasn't been from a lack of trying. I have managed to get out four times for just over 60 miles.  It's been to dark in the morning and evening (particularly since I want to be able to see any ice on the road) for commuting.  So, I've been trying to sneak away for rides on the weekend when the weather doesn't look horrible.

Riding in the cold is difficult as you want to dress so you don't get (too) cold when your screaming down a hill at faster than 30 mph, nor do you want to overheat climbing up the next hill at 4 mph. A couple of weeks ago, I got home from work, realized that nobody was home, and went for it.  It was just under 30 degrees Fahrenheit, I wore two pairs of socks, long underwear pants,  my biking pants, a t-shirt, long underwear shirt, long sleeve bicycle shirt, my orange bicycle jacket, baclava, and my new bicycle gloves and shoe covers.  And I had my bar mitts on the bike as well. 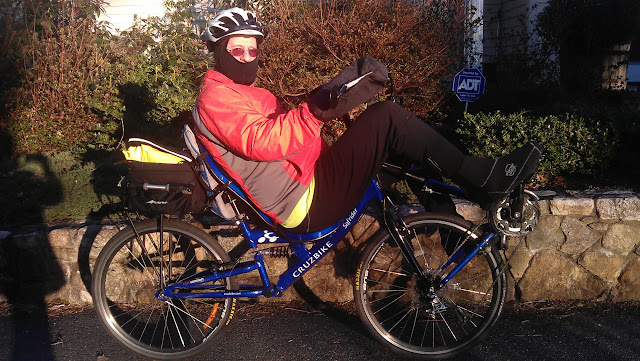 Fully dressed and ready to go.  Even when it's quite cold, i still like to ride with my water bladder for drinking. 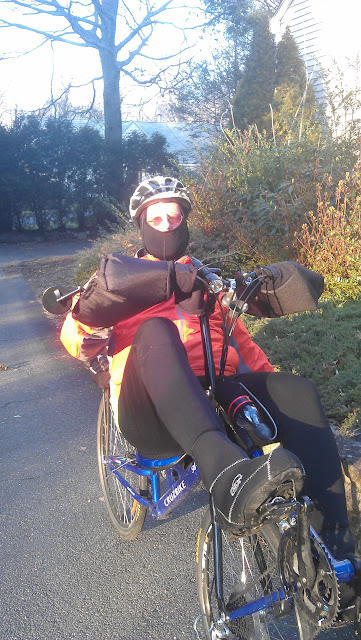 This all worked pretty well.  I was warm enough but not too hot (I would pull the mask over my face for the descents and pull it down for climbing).  My feet still got a little cold, but it was significantly better than in the past when it has been cold (the bottom of the shoes aren't sealed because of  how the cleats attach), but the shoe covers helped a lot.  My new gloves are a lot nicer than my old ones.

The week after that, we were found by the winter storm Nemo (get it? hee hee) and he dumped a couple feet of snow on us.  And apparently, we were very lucky.  I've got friends that live within 15 miles of Norwalk, and they got as much as another foot and a half of snow.  A week later and there are still places near buy that still have roads blocked by snow. 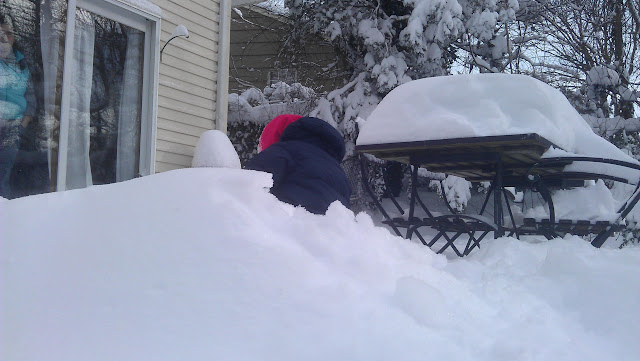 My little monkey playing in the snow.

It's been warm during the days, but there's still a significant amount of snow on the ground.  If the weather stays as it has been this week, it might be clear enough for a ride this weekend.  Of course, the latest forecast is for more snow.  Oh well.  Winter can't last that much longer, can it?
Posted by Charles Plager at 10:00 PM 3 comments: